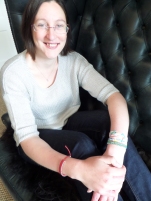 Author of “Death and the Weaver” in Urban Mythic 2, Lou Morgan answers a few questions for us!

Tell us a little about yourself and your writing.

I’m a novelist and short story writer, and I bounce infuriatingly between any kind of genre that takes my fancy. So far, that’s urban fantasy and horror for both adult and teen readers, because at the end of the day, I just like telling stories.

My first novel, Blood and Feathers, was an urban fantasy involving hellmouths and sarcastic angels with drinking problems, handguns and secrets, and which was nominated for British Fantasy Awards in both the best newcomer and best fantasy novel categories. The sequel, Blood and Feathers: Rebellion, picks up the story, and has also been nominated in the best fantasy novel category for this year’s BFAs. I’ve also written short stories for people like PS Publishing, Jurassic, Fox Spirit and Solaris – and Alchemy Press, of course.

And I have two cats, because that’s the law if you write fantasy.

What is at the root of your Urban Mythic story?

The idea behind “Death and the Weaver” came from Breton folklore. I spent a lot of time in Brittany growing up, and still go back most summers, so I know the stories pretty well. My favourite was always the Ankou,  a skeletal Grim Reaper figure whose role was to collect the souls of the dead from each parish. On the face of it, it doesn’t sound that unusual, but the interesting thing about the Ankou is that he is always one of the parishioners himself: the soul of the last person to die in the year serves as the Ankou for a year and is then replaced. I love the idea that this could (and probably would) mean it was someone you knew – and I started to wonder how that would change your relationship with death.

Bringing the Ankou up to date was a lot of fun. I read as many versions of the legend as I could, which stretched my French about as far as it could go! In most of them, the Ankou is very tall and usually has long white hair and a head which constantly revolves (so no death escapes him). He carries a scythe with the blade pointing forward and rides a cart pulled by two horses – one fat and one thin. Not all of these would work in a modern setting … but the C in a Citroen 2CV originally referred to “chevaux” (horses), so…

You’re known for having soundtracks for your work – did “Death and the Weaver” have a soundtrack or particular song?

Funnily enough, it did! Along with the Breton folklore, I love Breton music and I have quite a lot of it. I started out having some of the more traditional songs playing in the background, but even modern Breton music still has strong folk roots so there’re lots of bagpipes and accordions in there. I ended up with two songs pretty much on a loop, both by Anthony Chaplain. One was “Marie de la Dondaine” (click here) and the other was “Bzh” – basically a mash-up of several different traditional songs. The title is the abbreviation for the Breton name for Brittany: Breizh. Those two songs between them probably came to feel like a part of the story.

How has the transition between writing adult and YA fiction been? Is there anything you can do with your YA work that you couldn’t do with your adult work? Or vice versa?

I’ve probably been very lucky in that the kind of books I want to write hover around the border between YA and adult fiction. I’m always interested in the idea of identity and responsibility, which are two of the biggest themes in YA and still incredibly relevant beyond that. I mean, who gets to 18 and says, “Yes, that’s it. I know exactly who I am. This is me.”?

I love having the opportunity and freedom to work in both fields and I hope I don’t treat them that differently (although, in fairness, I try to swear a bit less in YA!). The one big change I’ve found, though, is that I feel there have to be more consequences in YA. Not in a judge-y, lecture-y sort of way, but the Blood and Feathers books have, for instance, a fair amount of casual violence in them … and I don’t think I’d be comfortable writing that into a YA.

Every genre comes with its own set of clichés; they’re what help us identify them as a particular genre, aren’t they? I think I’d rather get rid of the idea that there’s “literary” fiction and “genre” fiction and never the twain shall meet. There’s a fair amount of snobbery in either direction, and that utterly infuriates me. There are as many different stories in the world as there are ideas and not all of them will appeal to everyone … and that’s OK.

What inspired you to run a marathon next year and where can people go to sponsor you?

If only it were a full marathon! I’m actually running a half-marathon (although that’s still 13 miles which is enough to make me weep at the moment): the Bath Half, in March 2015. I’ve thought about it for a couple of years now, and never managed to talk myself into it, but I did one many years ago (the Moonwalk, which takes place at night through central London) and I loved the challenge. I am, clearly, a glutton for punishment.

As part of that, I’m hoping to raise some sponsorship money for Kids Company, who operate centres in both London and Bristol to provide practical, emotional and educational support to vulnerable inner-city children. You can find out a little more about them on their website.

Their work is amazing and incredibly worthwhile, with the potential to make an enormous difference to so many children’s lives, but they need at least £13.5 million a year to keep doing it. Even the tiniest donation helps towards that and is incredibly welcome, so if anyone would like to sponsor my months of running (which, believe me, is something you won’t hear me saying very often) to train through the winter, and for the race itself, you can find my sponsor page here: http://uk.virginmoneygiving.com/runloumorgan

I have a couple of stories I’m really excited about which should be surfacing in the near future. Besides “Death and the Weaver”, there’s a story about Oliver Cromwell’s other head which will appear in Fox Spirit’s Missing Monarchs issue of their Fox Pockets series, and I was thrilled to be asked to contribute to the third volume of the Zombie Apocalypse! anthologies. Zombies have never been my favourite monsters, so the chance to create one that interested me was too good to pass up.

The beginning of 2015 also sees the paperback release of Sleepless, my first YA book for Stripes Publishing as part of their Red Eye horror series, which follows a group of friends who take an unlicensed study drug they find on the internet. It’s all set around the Barbican and Smithfield meat market in central London, because ever since I lived there I knew I wanted to set a horror story there! And it’s probably not giving too much away to say that for it won’t end well for everyone…

Darlings! Hello!  We have a launch date for the ever marvellous Urban Mythic 2!
We will be unleashing the Anthology of Awesome at Fantasycon in York, on Saturday 6th September at 2pm.  Hurrah!

Not only that, we have cover!  Well, prelim cover.  Slight changes may be made to the font-y bits, but, hey, look… pretty picture from Edward Miller! 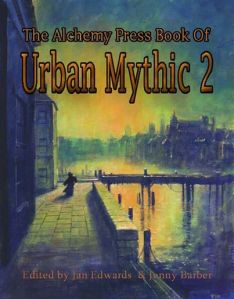 And! Final order of contents!

Are you excited? I’m excited! 😉

Oh what news we have for you my lovelies!

Our publisher overlords at Alchemy Press also made the short list for Best Small Press and Best Non Fiction (with Doors to Elsewhere by Mike Barrett); and with our loyal Fox Spirit editor hats on, we’re also rather pleased that Fox Spirit Books also made the shortlists in Best Small Press, and Best Anthology (with Tales of Eve edited by Mhairi Simpson).  So epic glee all round!  (Not least because so many women made the BFA short lists this year as well. Hurrah!)

Now! Urban Mythic #2 news!
Yes, my darlings, we have contents!  In alphabetical order, with proper order to follow anon, here be our fabulous people…

And! There will be a cover by Les Edwards – to be revealed at a later date.