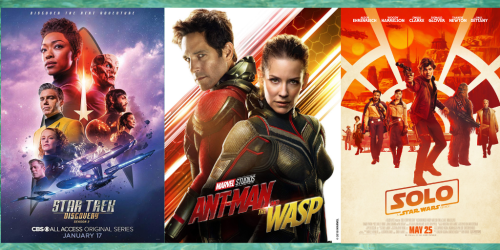 Due to the dual whammo of bank holidays and illness I’ve had the opportunity to catch up with watching things while I wait for my brain to start working again, and happily I picked some good ‘uns that were worth the wait.

First and foremost, a bingewatch of both seasons of Star Trek: Discovery. I’m not the most dedicated of Trek viewers – I’ve never seen Enterprise, I’ve got fond memories of random movies, the odd TOS and most of Next Gen, adore DS9 and quite like Voyager though I’ve not managed to catch all the seasons of that, so watching Discovery hadn’t been high on my priority list. Big mistake.

After seeing trusted online mates enthusing about it (and hearing that there was something to do with mycelium and spores in it… which got my attention as they’re things I’ve been fiddling about with for a mushroom based apocalypse thing I’ve been working on… but, digression…) I finally took the plunge and started watching. And continued watching. And couldn’t focus until I made it through all the episodes in one glorious blur of SF goodness. It is so good. Soooo good. From the set up and mirror universe shenanigans in S1, to the magnificence that is the twisty time-loopy red-angel plot of S2 and the potential it brings for S3, Disco is now firmly my favourite trek ever!

There are cool nods to the wider Trek universe, gorgeous character notes and relationships, Tilly! Stamets! Stamets and Engineer Jett! Georgiou snark! Culber being adorable! Moody young Spock in a beard! Nhan and Georgiou kicking ass! Burnham’s complicated relationships with all her adopted family members! Sentient space mushrooms! And the last two episodes of S2 near broke me with some of the emotional notes, and that’s a thing that doesn’t happen often. Bloody brilliant.

I also caught up with a couple of movies I’ve been meaning to see – Ant-Man and the Wasp, for one. I’m fairly certain I haven’t actually seen the first Ant-Man, save perhaps a few minutes here and there while flipping through movie channels, but that didn’t hinder my appreciation of the sequel. It’s a lot of fun and I’ll freely admit I was mainly there for the superhero lady representation – Wasp and Ghost (Killjoys fan in da house, yo!) were excellent and it’s always a joy to see women kicking ass and being super competent.

Another fun one was Solo. Again, I’m not the most dedicated of Star Wars viewers, but I have been loving the new movies – especially Rogue One and The Force Awakens (Rey and Jyn for the win! Competent leading ladies kicking all the ass and getting stuff done.) Like Disco does with Trek, Solo provides a lot of neat nods to its wider universe and manages to pull off some nice character interactions. I mean, what is not to love about the double act of Lando and L3?! And the Kessel Run! And shiny new Falcon! Admittedly it is a little uneven in places, but definitely worth sitting it out through the draggy bits as the larger whole is quite cool.