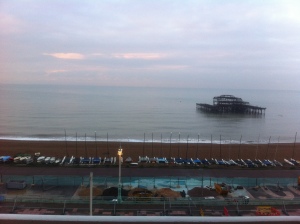 View from my window – the only bit of Brighton I saw!

Well, except for this bit of Brighton, also seen from my window! If you squint you can see the pier in the distance!

Phew. World Fantasy Con then. That was a thing. An exhausting thing, for the most part, given the whole working rather than con-ing, but the work was extremely enjoyable.  I’d probably have to say that’s the most fun I’ve had yet working a con.  Most of which is down to the awesome Team Red Coat and the con-com who remained relentlessly cheerful and friendly and efficient throughout.  Lou Morgan especially deserves a whole swimming pool of gin. 😉

And the mass of people we saw through the doors added heaps to the buzz of the thing.  (Is it weird I actually liked being swamped on the Reg Desk.  Over 1400 people we checked in! 1400!!! Egads! And most of them on Weds & Thurs! I seriously could not even stand up, let alone walk both those nights.)  We’ll pass quickly over that thing where I checked in one of the GoHs and completely missed the fact that they were one of the GoHs.  Or the famous SF author of very long standing who I totally didn’t recognise at all and who was very amused when I asked him his name and couldn’t quite believe I was seriously needing to be told. Or the well known ghost story anthologist who I got chatting to about anthologies without realising who he actually was.  Um, yes. Brain went splat many times.

And one of the perks of Reg Desk duty is getting to say hi to the many-many folks I follow on twitter and facebook and various blogs, though in the rush of the check in, mostly all I could manage by way of conversation was something like ‘oh, you’re X, brilliant/awesome/excellent!’ which possibly saved multiple bouts of fangirling and ‘OMG! I loved your story/book/blog post!’ followed by the inevitable utter panic that goes with total brain-freeze as I then forget everything I ever knew about why they’re awesome.

And I did, amazingly, manage to get out to a couple of actual con-events too.  The Urban Mythic Launch, of course, was the essential go-to event.  And we sold books, many books, and many more than we sold of Ancient Wonders last year, which is very cool. (There may be an Urban Mythic #2 next year, we’re in talks…)

I also did the Fearie Tales launch party and brought an actual hardback book (shock! horror! Didn’t-wait-for-the-ebook-scandal!) and got it signed by all the peeps that were there.  Which is not a thing I usually do.  (It’s a fab anthology, btw, only a couple of stories I wasn’t keen on but all the rest rocked!)

And doing the FT party introduced me to the merits of chairs! Which there weren’t any of. Which there really needed to be as there was no way I was going to be getting up again if I sat on the floor like many other people did.  Luckily there was this little stage thing that was perfect for perching on… But yes, con organisers of the future –  more chairs please! Many more chairs. Whole rooms of them. Chair-con! That’s what we need!

Um. Yes. Right. Anyway. Else?  There were a million free books on offer, which I somehow managed to not get around to getting any of. Got hugs off all my favourite people as well as some shiny new ones! Had to rush off Sunday morning so I missed the awards and wind down parties and sudden appearance of a wibbly-wobbly portal that let loose strange beasties from another dimension that no-one is talking about (conspiracy!) but totally happened, honest…

And if you want to take a gander at what else went on, the inexhaustable Stephen Theaker has compiled a list of pre and post WFC reports on the BFS forum here.

Am now looking forward to not working any cons next year so I can doss around and gossip with allllll the people at Fcon and Nine Worlds, and possible Edge Lit and Bristol Con too…  😉