I’m an American author and poet. Most of what I create is speculative – some sci-fi, fantasy, and what’s been called “mythpunk” – though I write a little bit of everything. On my blog I talk about real life: the writing process, the emotional ups and downs. I chronicle my experiences raising a child with special needs, because I feel there’s a lack of information and empathy for families who have to go through this, and it’s my way of contributing to a larger conversation. I like to write about what touches me, what fascinates me. A lot of my stories deal with death and madness, but not in a macabre sense. I like to explore liminalities.

What inspired you to write Passage?

I minored in anthropology as an undergrad, with a special interest in the Celts of Britain and Ireland. I was writing a thesis on Celtic death rituals, which is largely speculative due to a scarcity of archaeological evidence. I came across a discussion of how the Celts may have used the monoliths as a means of connecting themselves psychologically to the landscape, since they had emigrated there, and places like Newgrange and Stonehenge predated their culture considerably. I became so distracted with the idea that I wrote “Passage” instead of what I was meant to be working on. I scribbled it in the middle of my research notes.

I’d love to visit Great Britain in the Iron Age – though, to be honest, if the Doctor came to get me, I wouldn’t be picky.

I feel a closer kinship to ancient religions than to modern ones, at least in a spiritual sense. Our ancestors were more intimately tied to nature and her cycles, and that is reflected in their sacred sites.

I have poems due out in various magazines, all TBA, and I’ve been invited to participate in some local fiction anthologies. Right now I’m working on a sci-fi story inspired by Egyptian mythology and Edgar Rice Burroughs, and a modern-day fairy tale about a wicked librarian. I’m also working on my second novel, an urban fantasy, and my first poetry collection. I publish updates and links to my work on my blog. 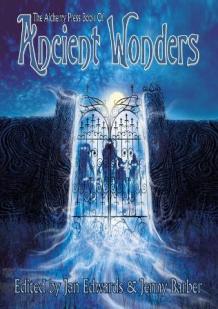