Aaaaand today we have Ancient Wonders author James Brogden under the spotlight!

I’m based in the Midlands; grew up in Australia and instantaneously fell in love with the UK as a teenager because of the dense layering of history, myth and legend that exists underfoot everywhere you go. I like to write urban fantasy – which is to say, horror without the clichés. Fantastical elements intruding upon everyday lives.

What inspired you to write “If Street”?

Robert Holdstock, mostly. I love the Mythago Wood books, which are very firmly rooted in the countryside, and have always been curious about what would happen in an urban setting, with all those ancient track ways buried under tarmac and concrete. I’ve also been researching Sutton Park for another novel, so the place was already stuck in my head.

I’d go to Hadrian’s Wall. Not only to see and appreciate the engineering, but also to get that sense that you are really on the edge of the world, that beyond this point there is no law or civilisation as you understand it. When my family moved to England we lived in the Borders, north of the wall, in the kind of place you got posted if you’d really annoyed someone back in Rome. I’d like to talk to them and ask them what that was like – but they’d probably tell me that they’re just soldiers doing their jobs and to sod off.

That sense of common humanity which goes beyond time and place. We went on a family trip to Hadrian’s Wall one Easter and saw that there was monument to the fallen soldiers of the legions who had been posted there, and it was exactly the same kind of monument you see today in small country villages, and it struck me how similar their feelings and experiences must have been to those of the men and women who are currently posted in, say, Afghanistan. I love old Iron Age hill forts for the same reason. It’s mind-blowing to stand in a hut circle three thousand years old and know that here was the place where they cooked their meals, here was the door where a child probably looked out for his friends first thing in the morning. That kind of thing.

Couple of things: a story called “The Remover of Obstacles” in Anachron Press’ anthology Urban Occult, and a second novel, Tourmaline published by Snowbooks, out in July.

[James Brogden was born in Manchester, grew up in Australia, and now lives with his wife and two daughters in Bromsgrove, Worcestershire, where he teaches English. His short stories have appeared in the Big Issue, the British Fantasy Society’s Dark Horizons, Gears Levers Volume One, and his first novel, The Narrows, has just been published by Snowbooks. When he’s not writing, or trying to teach children how to, he gets out into the mountains exploring the remains of Britain’s prehistoric past and hunting for standing stones. Fortunately they don’t run very fast. ] 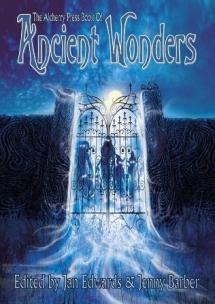